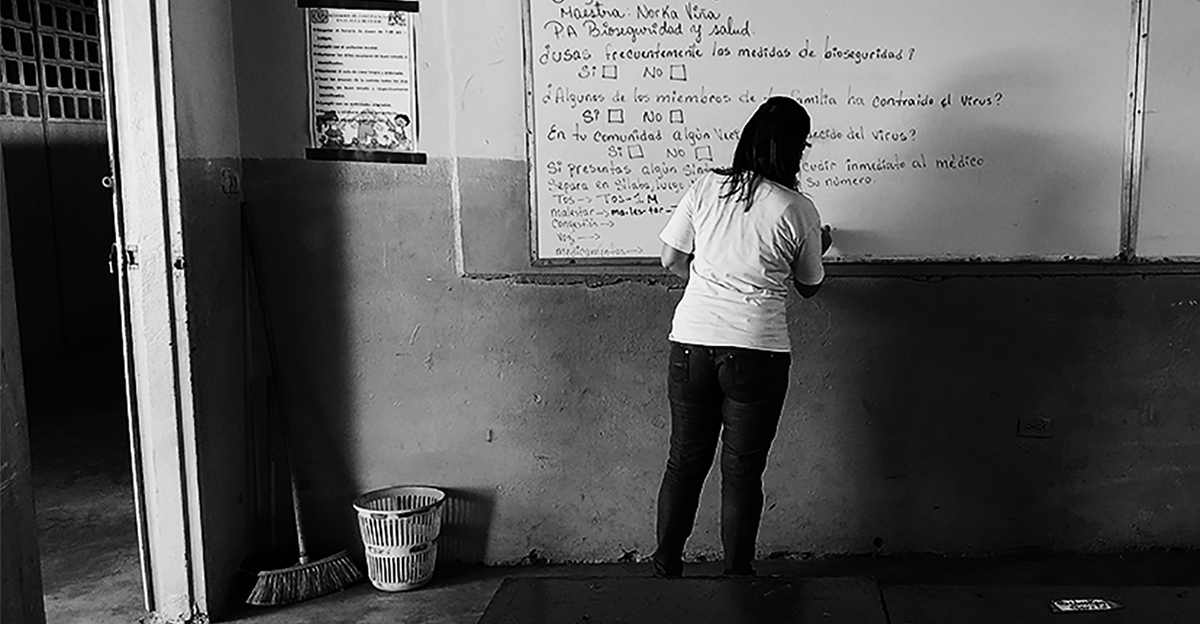 "Biosecurity and health" is the topic that is read on a blackboard in one of the classrooms of the “Julia Rodríguez Viña” Bolivarian School, in the Unare parish, Caroní de Bolívar municipality. What follows, with different colors of wasted ink, are questions about COVID-19.

The teacher Norka Viña receives only two of the 14 students that she should attend in her third grade classroom. She calls them to review the day's progress, while she gives them examples of how they might respond to the home assignment.

The light and the little air that enters the room are natural. They don't have light bulbs and Viña lost track of how long ago the air conditioning was stolen. Most of the brown desks were tucked in the background, just below some pictures alluding to national symbols.

The teacher began to take her first steps as a teacher more than 22 years ago, at that time, she substituted her mother in a rural school located in a rural sector via El Pao, Piar municipality of Bolívar state. There she traveled by truck, something impossible nowadays, due to the fuel shortage and the transportation deficit.
“I have always liked working with children and from the first moment I felt a passion for being a tetacher,” she says. Viña obtained a bachelor's degree at the Universidad Pedagógica Experimental Libertador (UPEL) and began working formally some 15 years ago.

She has taught in all sectors: private, semi-private and now in the public. For her, one of the most rewarding moments in her profession was when she saw her first group of students at the university and they thanked her for considering her to be the best teacher. "I always had one goal: to teach."

She points out that in addition to the content seen in class, she encourages her students to have training as citizens, so that they understand and apply human values.

"It is not necessary to disguise it, the government has neglected the most important aspect of a nation, which is education."

For Viña, the pandemic affected more the weak learning of students and aggravated the already marked neglect of education for the government. "It is not necessary to disguise it, the government has neglected the most important aspect of a nation, which is education."

The Living Conditions Survey (Encovi) highlights that 35% of people between the ages of 3 and 24 did not have access to education in 2021 and those who managed to continue with their studies did so in a context of academic lag, internet restrictions, and lack of electronic devices.

The teacher questions that some parents disregard school assignments and at the end of the school year they arrive expecting an answer that allows their children to pass the grade, even if they are not learned a thing and that´s a harm to the student.

Some children have weaknesses in subjects that should have already been learned, they have begun to read and write barely when they reach their grade. "The child needs to have that contact with his teacher, with his school," she says. Although she emphasizes that face-to-face classes are essential, she considers that learning is a marriage where parents must also participate.

Despite her return to face-to-face classes, this Tuesday some classrooms were locked. The teachers did not come and the few students who attended were sent home. The school, painted in different shades of beige, is one of the largest in the area. It had spaces such as a library and a culture room, which today are closed and unused.

Despite the great infrastructure, it does not have lighting and the protectors of the air conditioners only remain to show the conditions it once had. Although few valuables remain, the school continues to be dismantled with the theft of steel sheets. During the pandemic there were more than five robberies at the institution in few months. 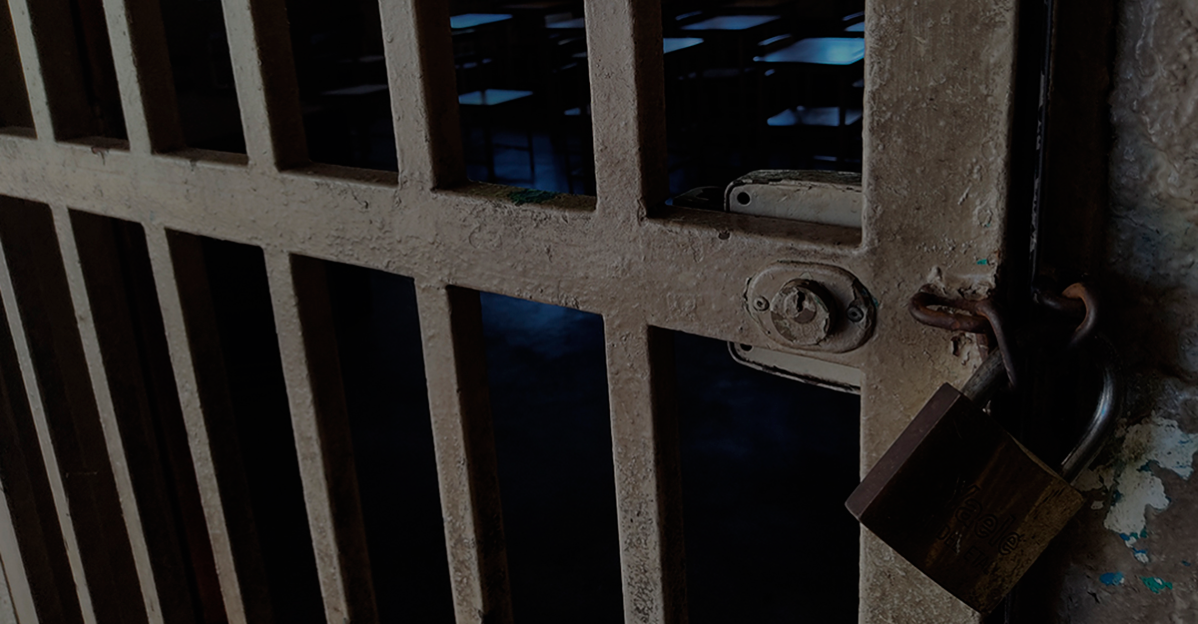 "I can't take it anymore, Norka"

During the health alarm due to the Covid-19 pandemic, educational coverage decreased dramatically for all ages in Venezuela, but especially for initial education (children between 3 and 5 years old) and university (young people between 18 and 24 years old).

Distance education and the deterioration of the quality of life of each family group maintain an upward trend in absenteeism and school dropouts in the country, reveals the new results of the Living Conditions Survey (Encovi) for the period 2020-2021, study carried out by the Andrés Bello Catholic University.

The study revealed that from 11 million people between the ages of three and 24 demanding education, only 65% were able to enroll in an educational institution.

The worsening of educational conditions is palpable in the work and emotional instability of teachers.

"I can't take it anymore, Norka." That was what a colleague from Viña told him before signing her resignation. Earning just over $ 10 a month, she had to decide between her students or feed her children. She ended up leaving the country.

More than three years ago, Viña was one of those who protested to achieve economic improvements in the education sector. She was with other sit-down companions de waiting for an answer that would mean an improvement for them, but that did not happen. Instead, they were threatened with being fired if they did not resume their work. At this moment the situation is much worse and without enough articulation and strength to make a representative protest again.

While she talks, Viña shows the WhatsApp statuses of her former co-workers. "All are between directed tasks, grocery stores and informal sales." Teachers who, due to the lack of income, were forced to work making pastries or crafts and leaving the classrooms, something that she still does not want.

"The demotivation is not because the teacher wants to earn millions, it is that our salary is so low that expenses such as transportation, uniforms and work materials are almost impossible," she lamented. The mask, the plastic mask, the alcohol - which she sprays every 10 minutes on her hands - and even the pens and markers, are there either because she bough them or any parent gave them to her. 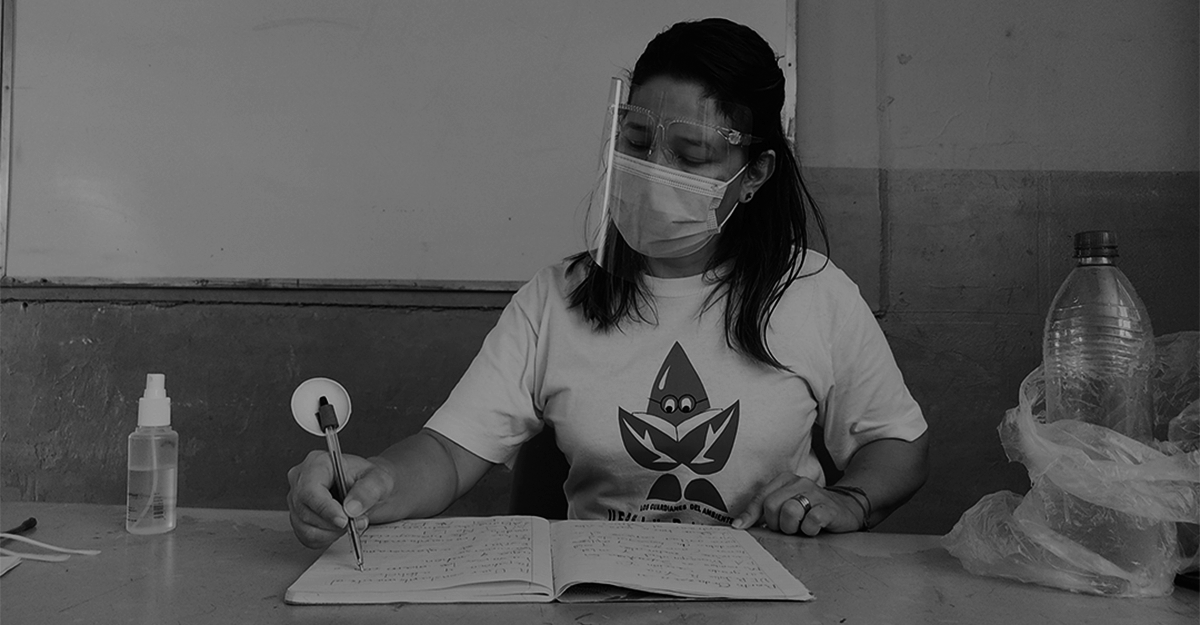 "The demotivation is not because the teacher wants to earn millions, it is that our salary is so low that for expenses such as transportation, uniforms and work materials you are not enough."

More than once, when her salary is paid and she goes out to the market, to the pharmacy, or when a colleague resigns, she has asked herself: ¿What am I doing here? "When you have a need at home, which you cannot coverl because it is not enough for you, there you become 200% demotivated." Given the low wages and not wanting to leave the classrooms and her students, Viña has had to rummage through private lessons in the afternoons and the sale of some food in her apartment. "I have found myself in need, because that is the word, to undertake private lessons." This implies leaving school after 12:00 noon, trying to get a ride or else, walking in the sun; get home, cook and prepare the living room of her apartment to receive children from 2:00 to 4:00 pm, where she complements what they has seen in class and improves her income for the basics: food. "There comes a time when you feel exhausted, because you come to attend some children at school, who also have been at home for a year and that discipline and habit must be resumed," she adds. During her early days, she never imagined that being a teacher would be an orphan state. Her dream, as when she began, continues to be that the teacher has their work respected and the needs of the staff are taken into account. Durante sus comienzos jamás imaginó que ser maestro sería quedar en estado de orfandad. Su sueño, al igual que cuando comenzó, sigue siendo que al docente le sea respetado su trabajo y las necesidades del personal sean tomadas en cuenta.

His message is aimed at continuing to accompany children, until they achieve decent working conditions: "Despite the adversities that the education sector is going through, we have to continue promoting and teaching the future of the country, that the most gratifying thing is that they fulfill your dreams, achieve a profession and be successful in life ”. 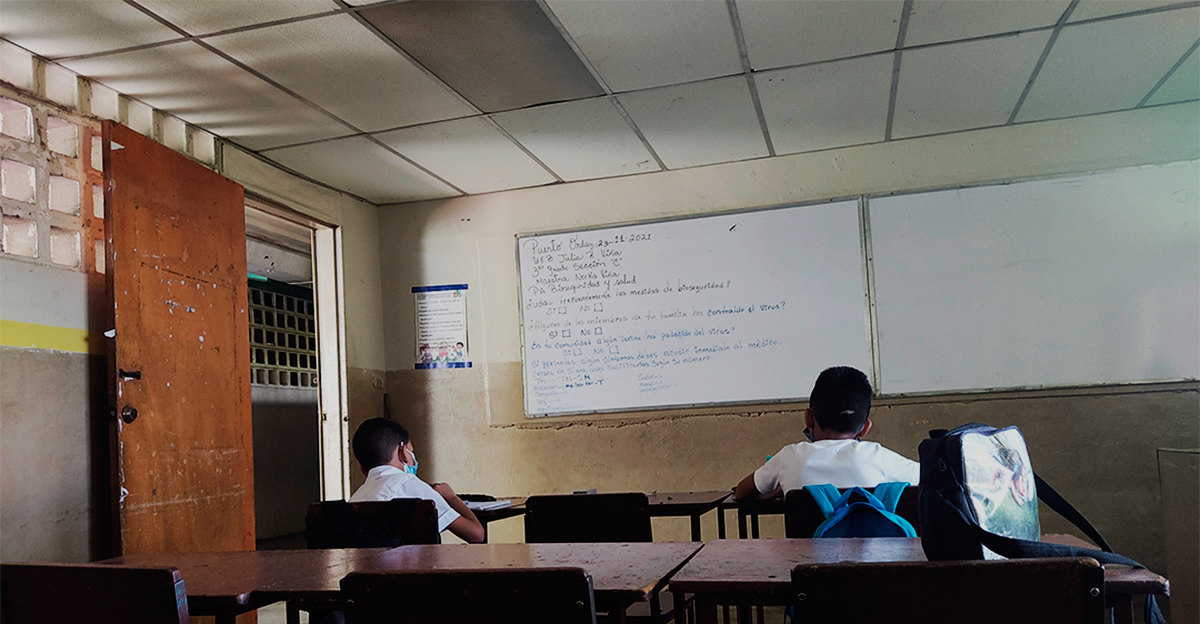 Norka Viña's story is one of the many testimonies from basic education teachers who cannot cover the cost of the food basket, while social assistance services are in practice inoperative, causing migration or a change of profession to survive.

In 2018, the report on the Complex Humanitarian Emergency in the Right of Education already warned that the income from teaching is insufficient to purchase the food basket. The national government announced that year the standardization of salary tables for teachers with amounts close to the minimum wage. The salary increases decreed by the government are not received in a timely manner and are diluted due to the hyperinflationary process that the country is going through.

Likewise, contractual benefits, such as hospitalization insurance and funeral services, have lagged far behind which makes it impossible to cover basic needs, being forced to resign, request permits or abandon their positions to either engage in other economic activities or migrate.

Aware of this picture and despite the overload, the need to search and the precarious conditions that she faces every day at school, Norka Viña persists in her profession.

She does not know how long she will last in the classroom and although the energies and enthusiasm may not be the same, she refuses to throw in the towel. "The children would be left alone and they are not to blame." 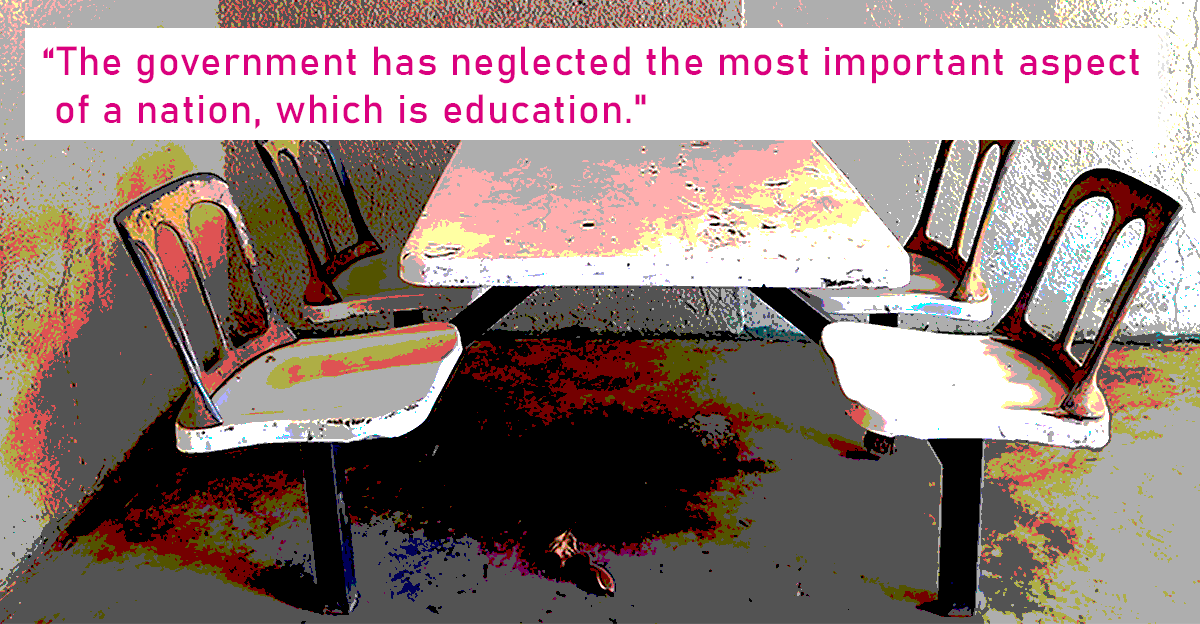