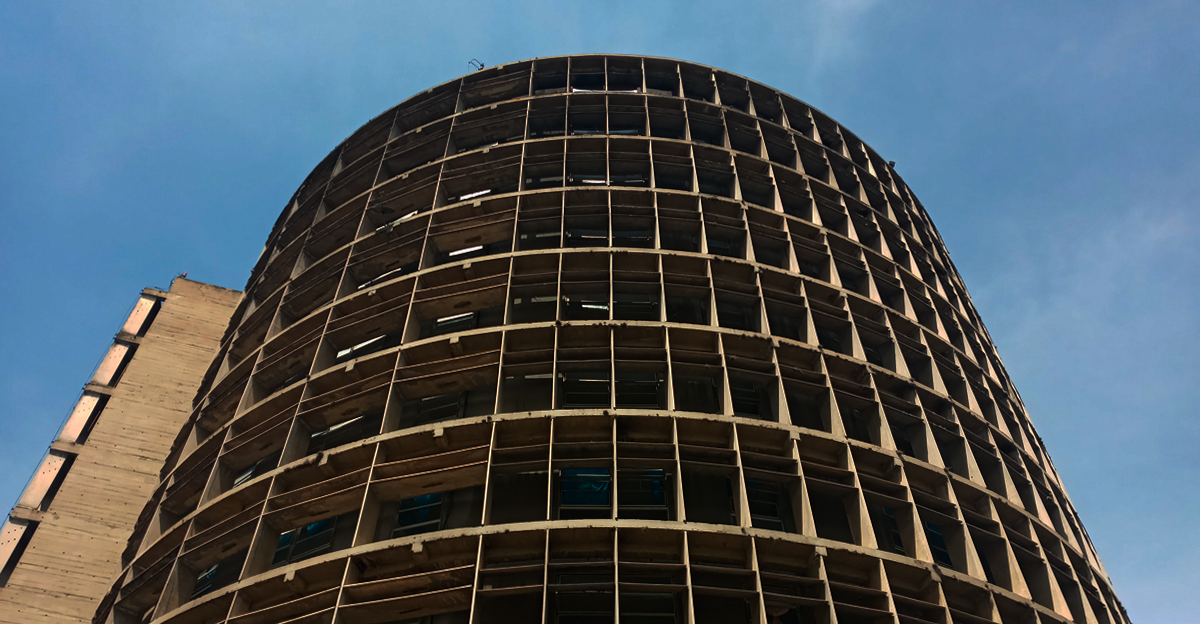 I was eight years old when we arrived in Merida from the capital of the republic. Thought by my father for the future of his children, we were starting a new life in a university city that was also a neat one, full of beautiful squares and well maintained parks, with an active and rampant tourism. Walking through downtown was as safe as it was common to meet people with blond hair and blue eyes speaking all kinds of languages, which I did not understand at my young age. The pavement of the streets and the cement of the sidewalks were impeccable, as were the street lights and public services. Merida was the cleanest city in Venezuela and remained so until the early 90s.

There, on what they call 16 de Septiembre Avenue, was that circular, monumental building, in a Merida that had few buildings at that time. That place was the University Hospital of the Andes or HULA as it was known then.

When my mother visited it the first time, she commented to the neighbors (a Spanish and an Italian woman) that it was like a private health facility: clean, impeccable. Walking through its shining corridors was impressive, as well as its attentive, helpful, human staff. She had to visit it many times, with her tremendous child who suffered frequent accidents typical of his age: fractures, sutures and even an operation for a hernia. My little sister was also born there, with the support of the Spanish neighbor who had been working there for years in the medical histories office. It is very difficult not to find an inhabitant of the city who is not in some way related to IAHULA. (University Hospital of The Andes by its acronym in Spanish)

In the late 80's, I had the good fortune to do there 160 hours of internship through an agreement of my course of medical aid at the Grupo Andino de Rescate (The private rescue group I worked with), covering adult´s emergency, pediatrics and delivery room. It was like being in one of the famous TV hospital series, helping the patients. Whether born in Merida or not, the level of IAHULA was so good that it was a place of everyone is proud of.

To my surprise, that building had been designed by an architect graduated from the National University of Colombia and who had worked on projects in Berlin, Baghdad, India and France, none other than for the studio of Charles-Édouard Jeanneret-Gris, better known in the architectural world as Le Corbusier. The architect is Augusto Tobito Acevedo, who between 1960 and 1961 designed the IAHULA for the architectural firm of Fuenmayor and Sayago, who also designed the Valencia School of Nursing and the Peripheral Hospital of Catia. 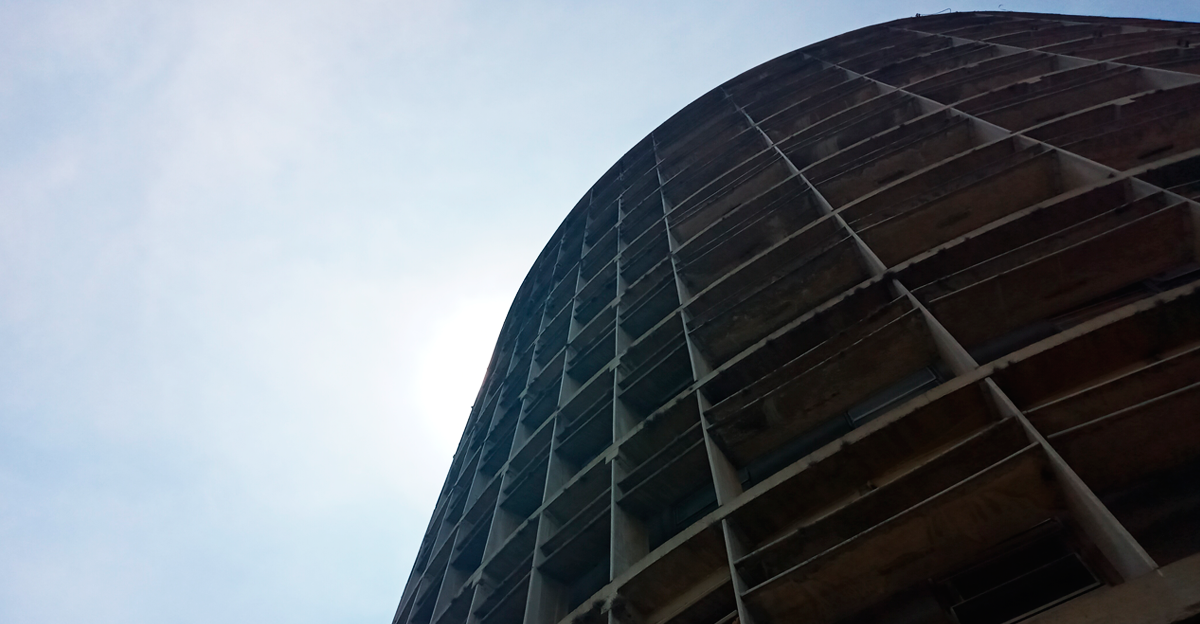 The nine-story circular tower divided into three modules and with more than 700 beds was formally inaugurated in 1973 by the president of the time, Rafael Caldera, as a type IV hospital. Its first director was Dr. Raúl Arellano.

Today, it continues to be the flagship hospital of the Andean region, strong and robust in the distance, althought carrying their wailing inside.

It is also a library of stories to tell. In recent decades has received patients and wounded of the most shocking events in the history of the región. Has seen constitutional and provisional presidents, imposed and popularly elected governors, devaluations and economic packages, student protests, coups, new constitution, referendum and revolution, mobilizations, protests, blackouts and lived the mega blackout of four days in March 2019. To all this, the today Autonomous Institute University Hospital of the Andes (IAHULA) has survived, but how has it done so? How does it continue to stand in the face of this complex humanitarian emergency that Venezuela has experienced since 2015?

The reason perhaps is simple, IAHULA is a "hospital with a soul". Endocrinology Specialist Doctor Jueida Azkoul Askul, a member of the Primeros Auxilios Ulandinos foundation (PAULA) believes so. Hailing from the neighboring state of Barinas, she did her undergraduate and graduate studies at the Faculty of Medicine of the Universidad de los Andes, and the hospital was her practice center, as it has been for thousands of students. According to Azkoul, IAHULA's free fall began in 2015 when patients began to die in the emergency room, without even being able to perform something as basic as intubation, let alone transplants, catheterizations or any other emergency procedure that could have saved their lives.

From a hospital with most of the specializations fully operative until the year 2000, it has become, in the last decade, a hospital that suffers frequent electrical shortage, with serious leaks, without elevators or air conditioners, with closed operating rooms, without furniture in appropriate conditions, without supplies and without personnel, who flee to better opportunities due to the lack of fair salaries and an appropriate work environment in which perform their duties.

The norm establishes one nurse for every three patients, but due to the shortages at IAHULA, what is complied with is one nurse for every 30. Of seven operating rooms that used to perform up to three surgeries a day, only one is left which is not in optimal conditions. The flagship hospital of the Andean region is dehumanized, the corridors became either public toilets or warehouse of useless equipment. Anguish and despair took over the few doctors and staff remaining in the institution. 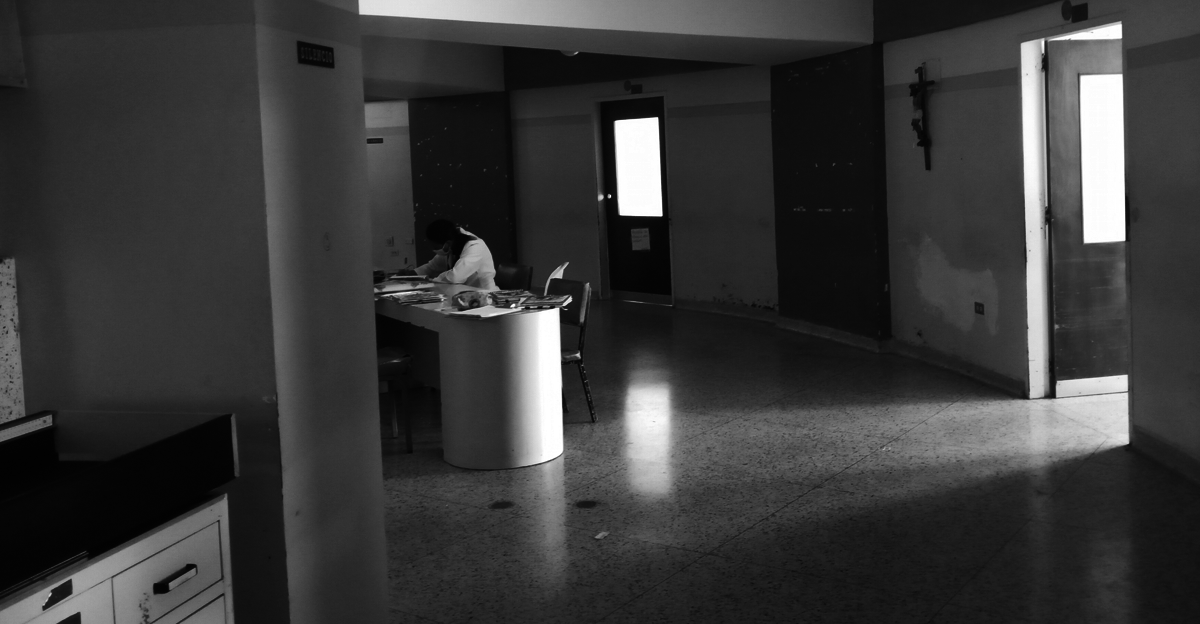 Options that give respite to the severe humanitarian crisis

IAHULA is the best example of resilience, it is the most vivid refusal to die - Jueida tells us and continues: Every day we come up with ideas so as not to close. The University-Hospital binomial has allowed its survival. Academics are fundamental, doctors, nurses and students have a high sense of altruism, everyone is nourished in the human aspect of the hospital, teaching and learning fills us, added to the high sense of belonging and love of the merideño for his hospital, even those who live in a remote corner of the world -.

The PAULA Foundation, whose origins date back to the protests of 2017, when the wounded were treated clandestinely, because they could not reach the hospital because of the threat of being arrested by the authorities at the time, is part of that army of NGOs that are constantly looking for new options. One of these solutions has been IAHULA's Padrinos program. Under the slogan "Give a specialist to your country, adopt a resident", they carry out a campaign that allows them to provide financial support to those who help; young resident personnel who are doing postgraduate studies and do not have the resources to continue their careers. So far, 140 students have received scholarships, thus trying to improve the situation of brain drain to which Venezuela has been subjected in recent years.

Added to these new options are initiatives such as the Tele radio marathon held in October 2019, where Merideños and friends turned out from their city and all corners of the planet on behalf of their hospital. The funds were earmarked for urgent repairs and rescue of the structure, which again allowed the humanization of the hospital. It is not for nothing that public health officials consider IAHULA to be a model hospital and "good" in comparison with the state of other healthcare centers in the country.

One of the key features that has characterized PAULA is the transparent management of resources and accountability. When we asked Dr. Azkoul about the success of PAULA's actions, she told us:

People must continue to have hope in credibility without us having a price tag, on this path I know that there are more good people - 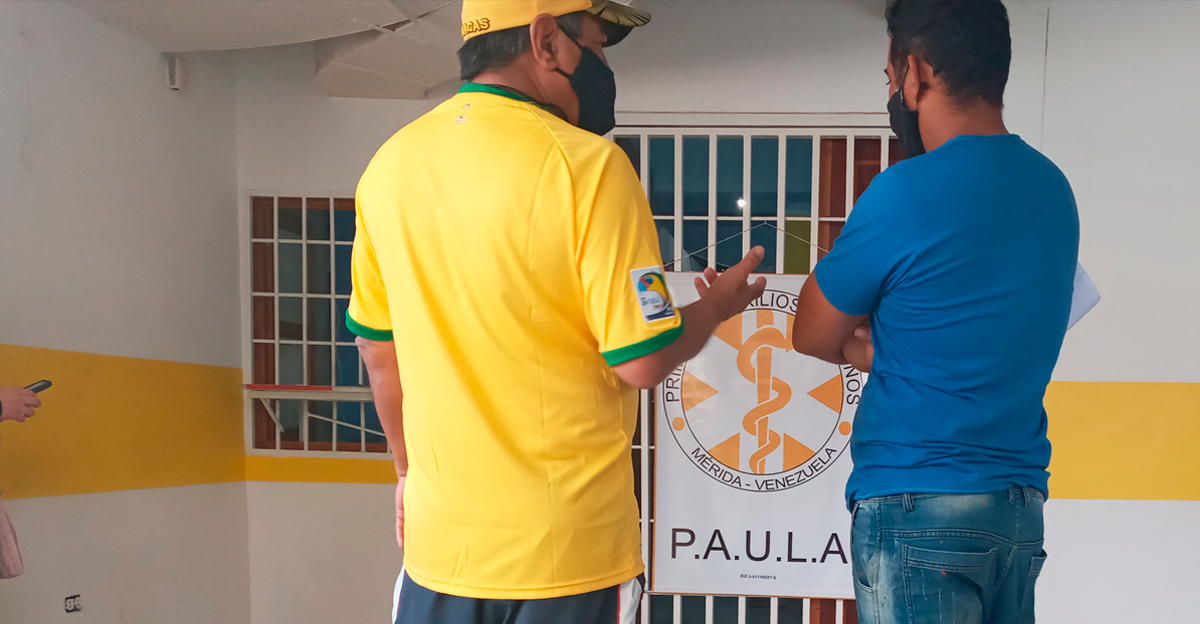 As if it were not enough to the already serious problems that IAHULA staff, non-governmental organizations, volunteers and patients have had to face, the arrival in March 2020 of SARS-COV2 or Covid 19 is added. In the eyes of those in charge, it was one more test of survival.

Laura Dávila was an auxiliary nurse in the pediatric emergency department, the first service that moved in 1973 to IAHULA from the Ambulatorio Belén, better known as the Little Children's Hospital, under the care of Dr. Américo Romero. She remembers with special detail that the mothers of the children patients did not have to bring anything with them, because IAHULA provided all the necessary supplies and linen, even diapers. That kind of public health care does not exist today. If a patient does not provide the necessary supplies, he or she cannot have access to surgery or proper care in the public health system.

Laura, returned 48 years later as a severe to critical Covid 19 patient, her oxygen saturation was 39, her fingertips were cyanotic. On January 7, 2021, she said goodbye to her husband and children in the face of an uncertain future. It would be just the beginning of her stay for almost four weeks at IAHULA, hospitalized in serious condition, though never unconscious. There she saw some patients overcome the disease, but also she experience the death of five. She remembers with special affection doctors, nurses and volunteers dedicated to their vocation. She describes them as invaluable creatures.

I never lacked anything, despite the precariousness, all the medicines, supplies and food sent by my family were delivered to me - she says.

His daughter Claribel, together with her siblings, lived it from the outside, looking for resources, donations and help to be able to cover the costs of the disease. The shifts in which they took turns were eternal, 24 hours a day, seven days a week in front of the emergency, on the other side of the street, sleeping in the car during the night, seeing how others were not so lucky and had to improvise a camp. They were the providers from outside the hospital, waiting for news or waiting to cover any request from the staff in charge of their mother.

Laura survived and was able to tell us her story, as IAHULA has done these 49 years of existence, neither she nor the hospital are the same. But the mystique of work prevails in most of those who continue to give their best for this hospital and remains indelible in the memory of those who have received their help.

To ventilate the miseries of Venezuelan healthcare is not easy, but it is necessary. The University Hospital of Merida is still alive, with its structure designed by a disciple of Le Corbusier and above all with its soul intact. Standing up to continue the work of teaching its undergraduate and postgraduate students, inserting in the DNA of each one of them the value of this unique health center in the country, mainly from its great human capital: its doctors, nurses, NGOs, volunteers and every Merideño who knows that his hospital exists and refuses to die. 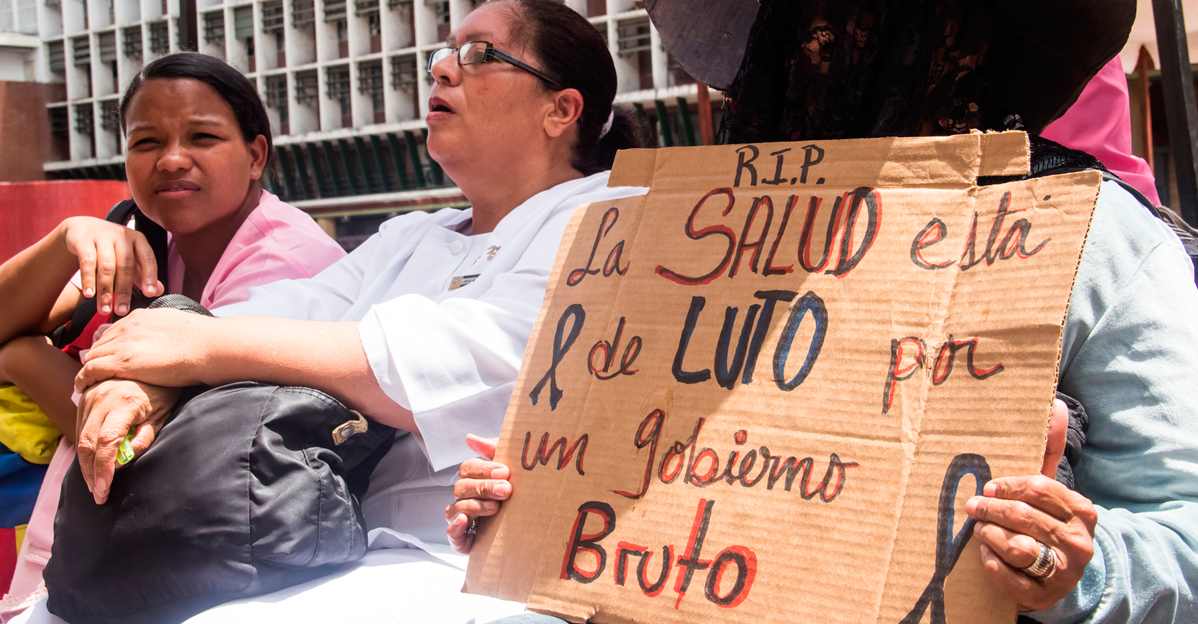